“Cyber thriller” is a new genre for me and I read my first book within it this week. Find out why it had me quickly turning pages – and terrifying me at the same time.

A new and dangerous computer bug is sweeping the internet. It’s smart, quick, sophisticated, and developed by elite hackers working for a cybercrime syndicate.

It can break through an unknown flaw in the world’s most secure computer chips and cripple any system within seconds—the ultimate cyber weapon.

American cyber sleuth Chuck Drayton finds himself caught in the deadly crossfire of an unfolding cyber war. Chuck and his small team of investigators join a desperate race against the great cyber powers and an unscrupulous tech entrepreneur to stop the zero-day before it’s too late. 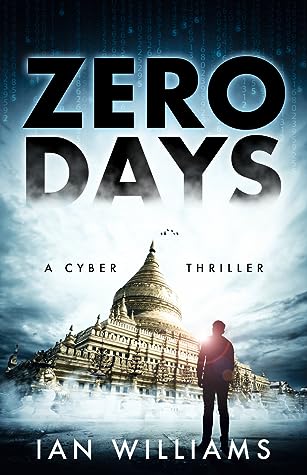 Before starting Zero Days, I had a conversation with a colleague about cyber attacks becoming modern warfare. I found it worrying but didn’t dwell on the idea too much. To be honest, I had always dismissed those who covered web cams or refused to buy an Alexa as overly paranoid. Now, thanks to this book, I feel like every move is being watched (OK, exaggeration but you get the impact it made on me).

I wasn’t sure about Zero Days at the start as it was a new kind of story to me, plus I was having a hard time keeping up with the characters and locations. However, after a couple of chapters, I was hooked. I mean, Williams writes this book in a way that you could be nothing else but hooked: it’s a glimpse into a very likely future, full of twists, and was scarier than any horror.

Don’t get me wrong, Zero Days deals with complex topics, but these topics are nicely explained. I know very little about computers but I was able to follow what was going on pretty well. What I wasn’t able to follow was who was behind the attacks. The book is written in a way that you just don’t know who to trust. The whole premise of the book, I guess, but I was impressed how it trickled down into the characters.

Now, I know this is being picky but I have to comment. At the beginning of the book, the Berlin U-Bahn ticket machines are hacked and people are unable to purchase tickets. The author writes that the authorities open the gates and let everyone ride for free. All good except there are no gates in Berlin train stations. People can hop on and hop off as they please; the only risk is being checked by a ticket inspector. OK, this error didn’t ruin the book but as I have lived in Berlin for the last 8 years, it frustrated me to a point I couldn’t forget.

But Berlin transport system aside, I am a massive fan of Zero Days. Thank you, Ian Williams, for opening the world of cyber thrillers to me.