Imagine one of your books being banned before it was ever even published and this event having a massively negative impact on your career. This is exactly what happened to Italian author Giuseppe Jorio.

An Author on Trial by Luciano Iorio

In 1939, the Italian writer Giuseppe Jorio (1902 – 1995) enjoyed great success with his debut novel, La Morte di un Uomo (Death of a Man), but, soon after the war, his career was ruined when he was prosecuted, subjected to five trials in six years, and found guilty of having written an obscene novel, Il Fuoco del Mondo (The Fire of the World). He was the first writer in post-war Italy to receive such a conviction, and the only one to receive a prison sentence.

In An Author on Trial, his son, Luciano Iorio, reveals for the first time how bigoted judges, in alignment with the illiberal and aggressive censorship policies ‘in defence of decency’ adopted by the ruling Christian Democracy party, openly fuelled by the Vatican, were determined to make an example of Giuseppe Jorio – even if that meant to misapply the law.

With the help of family letters and his father’s diaries, Luciano Iorio also tells the dramatic events in his father’s life which inspired the novel. He describes the difficult times in which the novel was written, the enormous strain of the five trials, and their effect on his father’s work, life and family. Particular attention is given to the father-son relationship, which was painfully shaped by the events that took place before and after the novel was written.

The book makes also a strong case for Giuseppe Jorio to be remembered as a valid and unique voice in twentieth-century Italian literature, and not purely as the author of the condemned and never published Il Fuoco del Mondo. 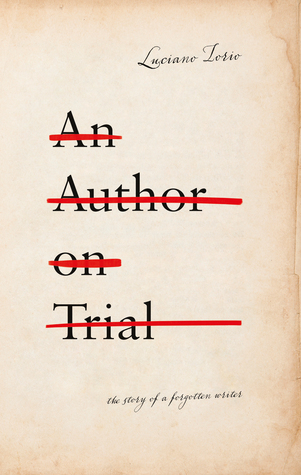 An Author on Trial was a simply fascinating book. Based on the title, I obviously expected it to be a story of a writer. What I didn’t expect was to have the deep emotion of the author, Giuseppe Jorio, come through. Even though his diary entries were translated from Italian, the feeling wasn’t lost. It was easy to feel Giuseppe’s deep loss when his affair with a younger woman, Tina, came to an end. His passion for writing was even more apparent and while it prevented him from being a better father and husband, his dedication to his work was admirable. It was the first time that I truly understood the struggles of a writer.

What I enjoyed even more than the story of Giuseppe was the historical element of this book. I’ve read many books based around the time of WWII but none set in Italy. Now, it didn’t really go into so much detail about the war itself but I was enthralled by the politics of post-war Italy. Not only were some books banned, but they were also banned for stupid reasons. All because of the Christian Democratic Party, which was fuelled by the Vatican. Growing up in a Catholic country means that I know only too well about the Church frowning on everyday, normal things. To have it also ruin your livelihood must have been absolutely atrocious.

Overall, this is an insightful and inspiring read that is a big thumbs up for me. At a little more than a hundred pages long, there really is no reason not to give An Author on Trial a go.