Haunted house? Yes please! If you feel the same then this is a book for you.

Bridge to Eternity* by Romola Farr introduces us to widow Audrey, who has suddenly left her comfortable home in the south of England to move into an old school boarding house on the edge of a moor. Then there is Tina, the young estate agent who sold the house to Audrey. Tina begins to regret selling the house to Audrey the more she begins to believe the place is haunted. What happens when you throw in Russian property developers, annoyed at losing a site ripe for demolition, plus Malcolm, a charming widower who falls for Audrey? Well, you have to read the book to find out. 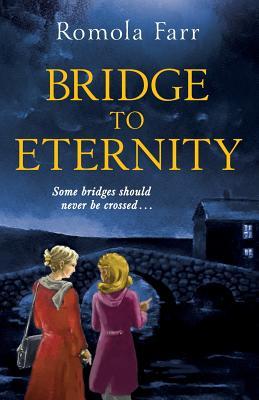 This book is creepy but not at all scary, just in case you are a reader who doesn’t very much like horror. Yes there is a haunted house that is still home to some of the young boys who lived there during the time it was a boarding school. And there are scenes in the book that describe the house that make you wonder what the hell Audrey is doing living there. However, as the story proceeds and you understand the house and it’s past more, this becomes a beautiful story full of emotions and an unresolved past.

The past of the boarding school and the lives of its inhabitants are released to the ready slowly through a series of flashback chapters that are formed as diary entries from former student, Robert Oakes. To be honest, I normally don’t connect to child characters but my heart went out to Robert. Plus, I loved how his chapters were written in an innocent but not childish way.

Audrey is the main character in the book and I would say she is somewhere in her sixties. It’s refreshing to have an older character for a change. She is more mature and sure of herself but when it comes to love and relationships, she could be any age. It’s good to know that some things don’t change. Other than Audrey and Robert I would say that there are no other outstanding characters. But that’s ok. Not everybody needs to play a leading role to make the story enjoyable.

I have to admit that there was one thing that got to me about Bridge to Eternity. While I was very pleased with how everything was wrapped up neatly in the conclusion, there was a lot of fluff content in the last thirty pages or so. I don’t think the story needed most of it and, without, it would have ended on more of a high.

Overall, this book was more than I imagined. The book cover and blurb just don’t do it justice. I hope I have and that would will be tempted to click the link in the blurb and buy yourself a copy.