There is only one way to start this book review: The Glorious Heresies* is absolutely epic.

The Glorious Heresies by Lisa McInerney is set in Cork City, Ireland in what seems to be a few years after the recession. It begins with Maureen who kills an intruder in her home and has to ask her not-so-savory son Jimmy to clean up the mess. When the dead man’s girlfriend, Georgie, starts asking questions it spells trouble. Not to mention when Maureen decides it is time to repent the murder and a whole load of other sins. We also have Ryan Cusack, a 15-year-old drug dealer who has to grow up very fast thanks to a dead mother and an alcoholic father. What we have when they all come together, well, you’ll just have to read the book to find out. 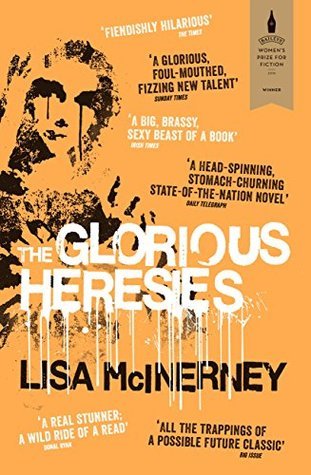 This is one of the best books I have read in a very long time. It was grim and dinghy and everything I love in a story. Another attraction was that it is based in my hometown, Cork City. Now, before reading The Glorious Heresies I heard the criticisms of some that it paints Cork in a terrible light. Yes, it does. The thing is though, it is accurate. There is no denying that parts of the city are exactly like McInerney’s Cork. What you have to remember when reading the book is that not all of Cork is like this and one would have to be very narrow-minded to think so. The badness depicted is just one element, an element that can be found in most places in the world. The fact that it takes place in Cork in this instance is just the fluke of selection by the author.

On a more lighthearted note, this book is very funny. It balances out the grim scenes. It’s made even more amusing (at least to me) by the inclusion of Cork slang. Thankfully, the author didn’t go to town on it and make the characters overly stereotypical.

Ah, the characters. Not one of them is likable. Hell, depending on your background perhaps, they are not even relatable. Nevertheless, it is easy to become invested in them. The strongest emotion you will probably feel while reading The Glorious Heresies is sympathy. For Ryan, a very smart and intelligent young man whose path down the wrong road was more or less predetermined. For Georgie, who gets sucked into a life of prostitution and just can’t get out of it. And for Maureen, whose experience as an unwed mother in Ireland leaves her with a scar that penetrates deep into her soul. Her relationship with the church, especially, has changed her in many ways. It turns her into the eccentric character that she is, and the one who brings the most laughs to the book.

It may seem from the last paragraph that the characters are utterly awful and they are when you look at them from a black and white point of view. Don’t, because what makes this book the great read that it is McInerney’s ability to pose philosophical questions to use through an entertaining story: are all people wither good or bad? Are we completely to blame for our own actions or does the influence of others pay a part? This book goes much deeper than I originally thought.

Overall, I can’t recommend this book enough and I would really love anyone who has read it to let me know what they thought in the comments. Now, I’m off to buy the sequel!