Today I’m travelling far across the world to the Philippines, and then onto the United States, for my next book review. Are you ready to join me?

My MacArthur* by Cindy Fazzi is set in Manila in 1930 where Douglas MacArthur is the most powerful man in the Philippines, a United States colony. He’s fifty years old, divorced, and he falls in love at first sight with a ravishing young Filipino woman. Her name is Isabel Rosario Cooper, an aspiring movie actress. One glance at his note and she thinks of him as my MacArthur. MacArthur pursues his romantic obsession even though he’s breaking numerous taboos. She reciprocates his affection because he could open doors for her financially struggling family. When MacArthur is appointed the U.S. Army chief of staff, he becomes the youngest four-star general and one of America’s most powerful men. Out of hubris, he takes Isabel with him to America without marrying her.

I’ve cut the blurb short because I don’t want to give away any more of the secrets of this book. Perhaps you have a vague idea of how this relationship ends though considering that the main characters were indeed real people. History buffs might know a lot about Douglas MacArthur but little is mentioned about Isabel Rosario Cooper. Cindy Fazzi took it upon herself to create a fictional story filling in the gaps of this love story  – and done it very well, may I add.

Ok, although I’ve called this a love story, I don’t think it is a romance. While there is no denying that Isabel and Douglas were besotted with one another, it was not how a relationship should be. Their scenes together were uncomfortable to read. One reason being the age gap, something I’m not normally against but Douglas was much too domineering toward younger Isabel for my liking. Not to say she was an entirely innocent party. Quite the opposite, in fact, making it hard to feel sorry for either character. On the flip side, I did find myself rooting for Isabel when it became apparent that her parents were “selling her” in return for favours from Douglas. I might not have been a fan of the relationship overall but I did want at least one bit of happiness for her.

My MacArthur is not a generic love story for other reasons too. There are various underlying themes which are of interest to the reader. Besides the historic nods to the impending Japanese war, the author touches on interracial relationships and how difficult they were at the time, the struggle to make it in show business, and the difference in morals between the Philippines and the United States. The fact that the book is told from both the perspective of Isabel and Douglas helped me better understand the collision between their two worlds.

Normally, I prefer a book with more twists and turns than My MacArthur. Yet it had me intrigued. I felt that the author did a wonderful job of interweaving in the problems of the era to a piece of historical fiction. Whatever did happen between Isabel and Douglas we will probably never know, but I had some great hours reading Cindy Fazzi take on things. 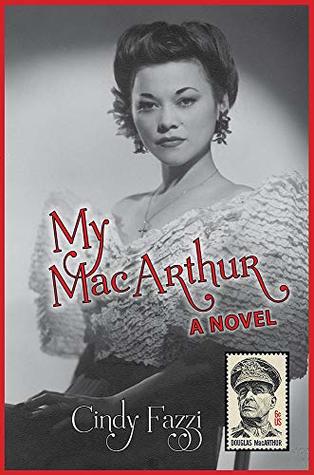 About the Author
Cindy Fazzi is a Filipino-American writer and former Associated Press reporter. She has worked as a journalist in the Philippines, Taiwan, and the United States. My MacArthur, published by Sand Hill Review Press, is her literary debut. She writes romance novels under the pen name Vina Arno. Her first romance book, In His Corner, was published by Lyrical Press in 2015. Her second romance novel, Finder Keeper of My Heart, was published by Painted Hearts Publishing in 2018. Her short stories have been published in Snake Nation Review, Copperfield Review, and SN Review.
You can find Cindy at –
Author Website: https://www.cindyfazzi.com/
Twitter: https://twitter.com/CindyFazzi
Instagram: https://www.instagram.com/cindyfazzi/
Facebook: https://www.facebook.com/Cindy-Fazzi-779654065440439/
Goodreads: https://www.goodreads.com/author/show/862157.Cindy_Fazzi