Historical fiction has taken centre stage frequently here on Joyful Antidotes, what with The Woolgrower’s Companion and The Silk Weaver’s Wife. I’m going to continue along this vein but today’s review is one of my favourite threads of historical fiction – books set during WWII.

Eleanor’s Secret* by Caroline Beecham tells the story of Eleanor Roy who wants to work as a war artist. However, she instead finds herself recruited by the War Artist Advisory Committee, through which she meets handsome artist Jack Valante. Soon into their romance, Jack is posted overseas and is unreachable when Eleanor needs to urgently deliver some unexpected news to him. Can Eleanor find Jack and will they be happily reunited after the war?

Usually, this is the part of the review where I would give my opinion and encourage you to check out the book. Although I will do that, I don’t think it will do Eleanor’s Secret justice. Instead, I am going to shed some background information on the story and believe me, that will have you purchasing a copy in no time.

What really stood out for me in this book was the focus on war artists, a profession I had never heard of up until this point. Basically, during the period of WWII, the sale of artwork of all kinds became incredibly scarce and, as a result, the livelihoods of artists more or less disappeared. Enter The War Artists’ Advisory Committee whose role was to recruit artists (400 in total) to record the war but also safeguard them from the frontline (whether they officially admitted this or not). As you can very well imagine, just a very small percentage of these artists were women.

Eleanor’s Secret recalls this part of the war on two fronts: from the side of Eleanor who dreamed of being a war artist and Jack, who found himself taking on the role. Eleanor and Jack are both wonderful characters and through them, we learn of an important piece of history not everybody is familiar with. Beecham worked to ensure her depiction was as accurate as possible by viewing WWII art, reading artists diaries, visiting important settings and, most importantly, interviewed artists. As a result of the author’s hard work, I enjoy not only a wonderful book but became aware of a part of history that interested me a lot. And you all know how I love to receive factual information through fictional books!

I believe that the above text showcases the brilliance of Eleanor’s Secret far more than my humble opinion but if you are interested in what I think, read on. There was an unexpected flow to this story that I truly enjoyed. I had imagined it to progress in one way but the turn it took was better than I could have imagined. Therefore, the more I read the more sucked in I got until one night I was awake at 2 am because I just had to know the conclusion.

I mentioned earlier that the main characters were great but there was something special which stood out in Eleanor for me. Eleanor is an ordinary hero and, in my opinion, there are not enough of them in this world. fictional or not. Her desire to help the war effort in whatever way she could was admirable and the strength she showcases throughout the book is something I wish I had more of. Eleanor is a prime example of how someone needs not have had cured a disease or be famous in order to be a role model.

One small negative is that in some parts I didn’t feel the story was as developed as it should have been. There were a few small gaps but whether or not they were a result of my greed and wanting more, decide for yourself when you read Eleanor’s Secret. One thing I can say though is what was missing in development was made up for ten-fold in emotion.

Overall, just in case you weren’t able to tell already, I wholly recommend this book. I will certainly be keeping an eye out from other works by Caroline Beecham from this point on!

I was sent a copy of this book in return for an honest review. 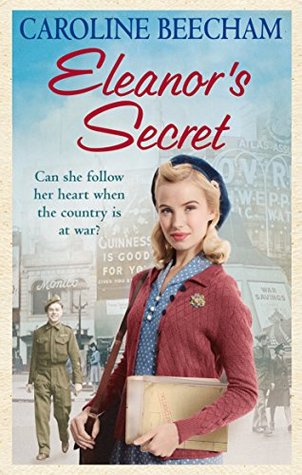