I don’t post comedy often enough here on Joyful Antidotes. I get much too carried away in the thrillers and dramas to somewhat loosen up with my reading choices. However, I took a break from the norm with one of my latest reads and, if I do say so myself, it was an upstanding example of dry British wit.

Scoop of the Year by Tom Claver tells the story of Martin, a down-on-his-luck journalist whose fortune becomes even worse when the ever-charming, universally loved Tom de Lacy grabs the limelight, and the financial correspondence job, at the magazine they both work at. Martin does his best to sabotage Tom’s career but what ultimately happens is Martin loses his job and Tom becomes a television presenter. So, when Martin discovers what could be the “scoop of the year”, he is determined to succeed.

I’m going to kick off this review discussing my favourite element of Scoop of the Year, the characters. Every character in this book was either unlikable, annoying or irritating in some way – and I loved it! The wit of the author wouldn’t have come across as well if the characters had been likeable and I’m very glad he choose to go down this route. I’m really starting at value books that have no likeable characters. Books written like this are provocative and the characters earn our attention. I like how these types of characters (especially in Scoop of the Year) generate problems that need a resolution as it keeps me intrigued and engaged.

Saying that, I did have a soft spot for Jebb. I can’t give away too much about him here as he is key to some of the bigger events in the book, only to say that he is a textbook unlikable character but one that will make space for himself in your heart. I actually thought I liked Martin within the first few chapters and perceived him to be a hard-working family man but he is actually vicious and vindictive and all those horrible things that make a person interesting, when you don’t have to deal with them in your own life, of course.

The other feature that made this a truly enjoyable story for me was the dark, dry humour. I am a big fan of wit and sarcasm and Scoop of the Year has it in bucket loads. There were points in the book that quite serious but then one offhand remark would be thrown in that made me laugh out loud.

Finally, I love the storyline of this book. It had me intrigued from the start because a career as a journalist is something that has intrigued me from a very early age. I believe Scoop of the Year gave a good insight into the industry, even if some parts might have been exaggerated. Also, the author presents a rather unique story, which was another reason I was happy to have picked up this book. I don’t think I am going to come across another book like this in a long time. 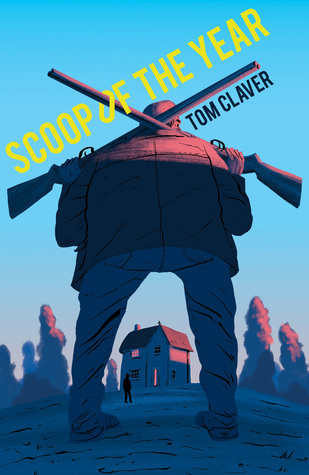