My do I love a good horror story! Yet, I don’t seem to read enough of the genre, hence why you don’t often see horror reviewed here. So, you can imagine how happy I was to be contacted by Emma at The Book Marketing Expert with a story I just couldn’t turn down.

Storyland: A Terrifying Thriller by Bryan W. Alaspa focuses on mildly famous comic book writer Ned who has just found out his childhood best friend Martin has brutally slaughtered a family. At first, the crime appears to have been committed out of the blue but there is a strange coincidence that the crime occurred in the same town where young Billy Marsterson vanished decades before. Soon Ned is sucked back into Storyland, the game he and Martin played as children, and the walls he built over many years start crumbling down.

I really, really enjoyed this book! I mean, I read some of it at night-time with just my phone for light and I was seriously spooked out. That has to mean something, right? The story itself was creepy and original but I think the success of the book is more due to Alaspa’s writing style and wonderful ability to tell a tale which sucks you in. There was something about the uncomplicated prose that made everything a bit more real. In particular, I loved the interaction between Ned and his publisher, who breaks the news of the murder. The expression of disbelief and the slight gossipy nature of the scene plays out exactly how I imagine it would in real life.

Storyland is a fast paced book and it was able to satisfy my urges of wanting to know more and know it fast. Tension and intrigue are the main emotions I felt while reading and these emotions were set up nicely at the beginning of the book when Alaspa explains Storyland (the game). As I continued to read, the story played like an 80s-style horror film in my head. That is a good thing. They made the best horror films back then.

I want to touch back on the realism of Storyland for my final and most important point. Storyland was eerie and creepy and any other similar adjective you could replace those words with but, the scariest thing of all, it was sad. It was sad because this was not simply a story about a brutal murder. What Storyland was really about was mental illness, sexual abuse and repressed memories, things we are much more susceptible to in everyday life. The possibility of us going through what Ned and Martin did, or someone close to us having to endure such hardships, was the scariest things of all.

I cannot recommend Storyland enough. It’s certainly made my top 10 books of 2017 and I can see myself returning to it at some point in the future. Go pick it up and experience the emotional rollercoaster for yourself. 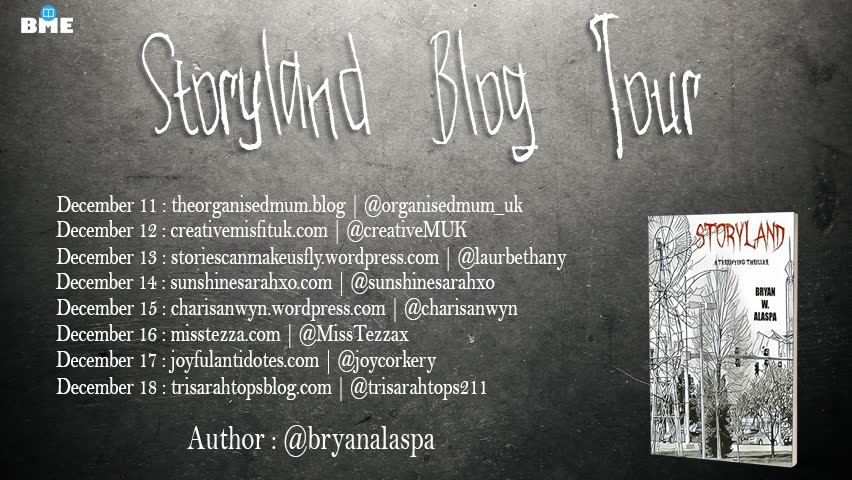