Most of my content lately has been cheerful and Christmas inspired. I am about to change that right around with this Cold War-era spy thriller.

Rasputin’s Legacy by Lee Jackson is set in the Cold War era and is centred around a rogue Russian general attempting to stage a coup and covert operator Atcho who goes deep inside Siberia to stop him.

I have a bit of a lame reason for wanting to read this book. I saw ‘Rasputin’ in the title and my fascination with his story attracted me. Rasputin’s Legacy doesn’t revolve around the man himself as much as I thought or would have liked, but by no means am I disappointed by what I read.

The prologue sets the book up for great things, which continue right through until the very end. There is no end to the twists and turns in this book and it is rather heavily based in the political sphere, the CIA and the KGB. However, there wasn’t a time when I felt lost or in over my head with the language used. Jackson is actually a retired Infantry Officer in the US Army and it really shows in his writing – he must have experience explaining complex matters in layman’s terms. However, my favourite aspect of Jackson’s writing is how well he was able to blend fact and fiction together. Sometimes I needed to pause and check if what he described actually happened in reality!

Every character in this book, whether likeable or not, was very smart and extremely well-written. However, there were two in particular that stood out to me. Tony Collins, the Washington Post journalist was a breath of fresh air amongst a cast almost solely working in governmental roles. He was also a great example of just how influential the media can be. However, it is Sophia who is my favourite. The only female character in the book, it seemed at first she would simply play the role of Atcho’s fiancée. How excited was I when she became a former CIA operative who goes rogue to save him. Jackson brought to the forefront a strong, independent female character who could hold her own in a male-dominated area and I applaud him for that.

Finally, I just want to state that this is the second book in the series but can certainly be read as a standalone book. At the beginning, like me, you might feel like there is a gap missing in the story but don’t fear, all the information you need is provided to truly enjoy Rasputin’s Legacy.

“Pure Gold!” CarmineZozzora, Producer of Die Hard with a Vengeance and Color of Night.

“Wow!. A must read.” Joe Galloway, NYT Bestselling Author of We Were Soldiers Once…and Young (adapted to a Mel Gibson movie) and We Are Soldiers Still.

“With this page-turning thriller, Lee connects the brooding mystic Rasputinto the Cold War, traces his dark influence into the present, and makesit relevant to today’s churning world events. Stunning!”Bill Thompson, Editor of Stephen King’s Carrie and John Grisham’s The Firm.

“Clearly one of the best books of historical fiction I have ever read. Extremely entertaining and educational at the same time.” Lieutenant-General RickLynch (Retired), former Commanding General, 3rd Infantry Division during the Surge in Iraq.

Also Available in the Cold War Series
Curse The Moon 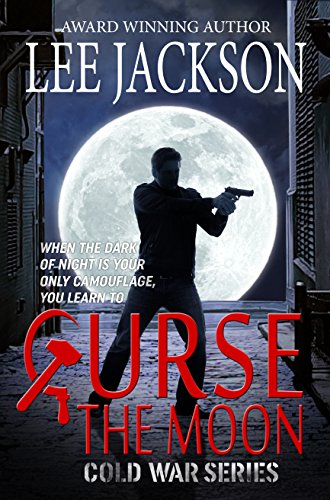 His code-name is Atcho. He leads guerrilla fighters through the US-supported insurgency that rages at the Bay of Pigs in the early days of Fidel Castro’s Cuba. Captured and cast into the island’s worst dungeons, Atcho learns that a phantom-like officer of the Soviet KGB shadows him. Inexplicably released from incarceration and still dedicated to his country, he battles through the bowels of the Kremlin in Moscow, into the granite halls at West Point, and finally to highest levels in Washington, DC. Atcho’s rise opens doors into US National Defense even as the seemingly omniscient KGB officer holds unflinching sway over his actions. His public life clashes with secrets that only he and his tormentor share, isolating him in a world of intrigue among people whom he is determined not to betray – and then he finds that he is the trigger that could spark thermonuclear war.

“Curse the Moon has it all, packaging its tense thriller in the cloak of understanding motivations both political and personal. It’s all about danger, sacrifice, and how even would-be romance bows to the pressure of a covert operator’s obligations.”D. Donovan, eBook Reviewer, Midwest Book Review

THE STORY BEHIND THIS BOOK

“There is much in “Curse The Moon” that is based on real events, and two of the primary characters, Atcho and his daughter, Isabel, were actually based on my father-in-law and my wife. In fact, the code-name “Atcho” is my father-in-law’s real nickname. He fought in the counterrevolution against Castro, was imprisoned after the Bay of Pigs, and spent 17 years in some of Castro’s worst prisons. In the book, he is a composite character. Some of the fictional Atcho’s expoits were the real Atcho’s, and some were accomplished by others in the resistance. The real aspects in the book are the abject cruelty that the Castro regime imposed, and the intrepidity and courage that Cuban patriots exhibited in resisting him.

The other very real aspect was the relationship between both the real and fictional Atchos and their fictional and real respective daughters. Both grew up with their fathers having been stripped from their homes and country, and witnessed much of the savagery as little girls. That stayed with my wife such that, although on a cognitive basis she understood and was even proud of the courage of her father, on a deeper level, she suffered from his absence and felt a sense of having been abandoned – other men escaped Cuba with their families intact.

My initial motivation for writing the book was as a tribute to the real Atcho and my wife. In researching it, I found a story with all the elements of a thriller, and one that should be told: a near holocaust took place 90 miles south of Florida, and most Americans know nothing about it. Further, because of its strategic location just off the US coast, Cuba occupied an outsized place in the Cold War competition between the US and the Soviet Union. This story takes the Cuban revolution as its launching point, and then delves into the strained and often subtle relations between the two superpowers in the waining days of the Cold War. It questions the actions of John Kennedy, brings alive the charm, sternness, and personality of Ronald Reagan, and views Mikhail Gorbachev with curiosity.” ~ Lee Jackson 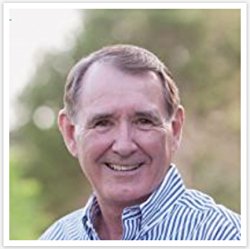 Lee Jackson is a bestselling, award-winning thriller author. He was an Infantry officer with a front row seat on world affairs, and spent 38 months in Iraq and Afghanistan. His first book, Curse The Moon, was published in 5 countries, and follows Atcho, a counter-revolutionary leader in Cuba turned unwilling spy in the U.S. The odds he faces seem overwhelming as he must choose between saving the world from nuclear holocaust – or his daughter. In Lee’s second book, Rasputin’s Legacy, Atcho faces a surreal challenge: he must save the country that enslaved his own, or deliver control of the Soviet nuclear apparatus into the hands of a maniac. Can he set aside his personal desire for revenge?

Lee lives with his wife in Texas, and is a full time writer.

Find the author on the following sites…
WebsiteFacebookTwitterYouTubeGoodreadsAmazon Author Page

I received this book through Beck Valley Books Book Tours, I have volunteered to share my review and all the opinions are 100% my own.

NOW FOR THE AUTHOR’S GIVEAWAY !! 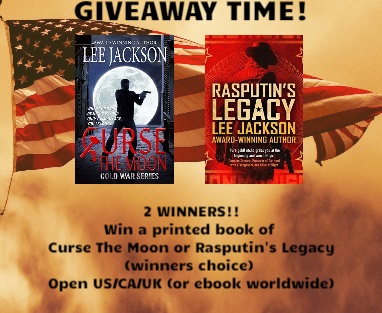