I have been on a bit of a healthy eating kick these past few weeks, and have even joined a gym. There have been some ups and downs, and when I say ups and downs, I mean gorging on junk, but all in all, progress has been made.

I also have a bit of an obsession with food. I like to go to restaurants, to try to cook new meals, read food blogs and anything else you can think of in between. I also love Asian cuisine. So, when I saw the book Japanese Women Don’t Get Old Or Fat: Secrets Of My Mother’s Tokyo Kitchen by Naomi Moriyama and William Doyle, it sent out a shining beacon to me. 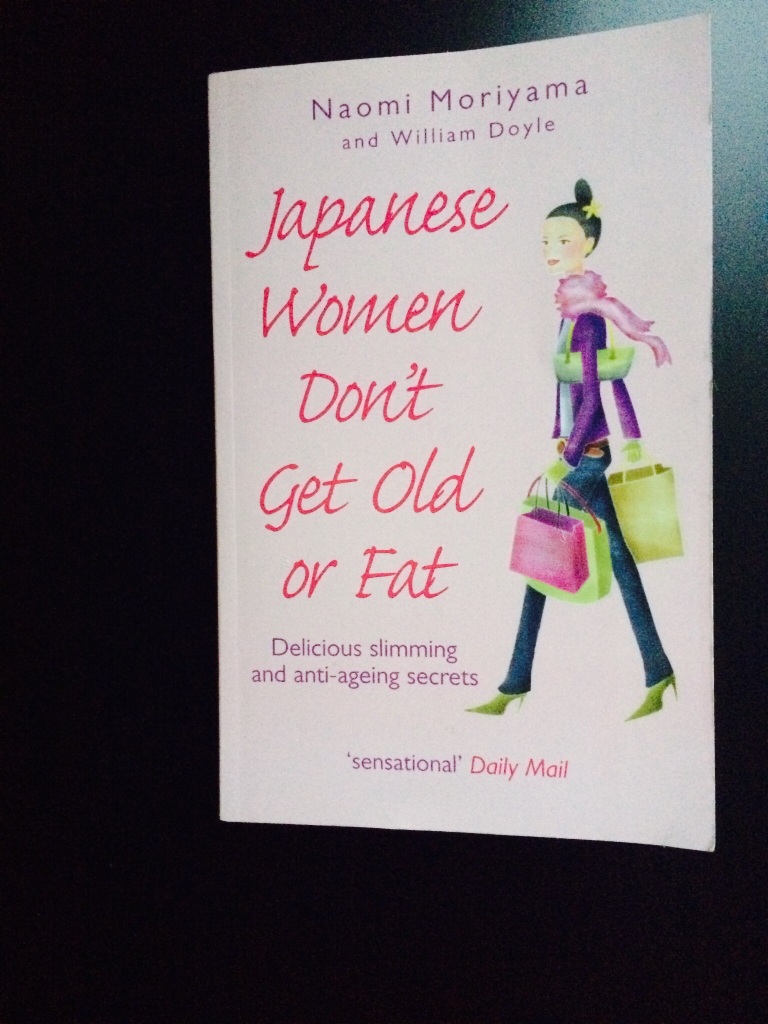 When I think back, I see that it was not quite clear to me what exactly I was expecting from this book. Most likely it was some tips I could incorporate to further improve my health and well-being. Instead, what I found was suggestions which I already knew deep down inside.

The book begins by discussing obesity rates in the world and basically comparing Japan to some other, let’s say less healthy, countries. The United States is the country which perhaps comes up the most often. I guess this is because the author lives in the US so therefore, has experience of both diets – she even states how she put on quite a bit of weight when she lived there for a time during her college years. While it is natural for her to base the book somewhat on her own personal experience, sometimes it gives the impression that she is painting all US citizens with the one brush. This information did not interest me.

As you move further into the book, some quite valid and interesting points are divulged. Simply:

The tone in which these points were put across was not one bit condescending which made me feel like I could accept this advice graciously, and not feel like I was being scolded. In fact, this points have stuck with me a number of weeks after having read the book. This leads me into the most negative aspect of the book, at least in my opinion: I am not sure if I remember these points because they were life changing, or because they were drilled into my head. Yes, I found this book a bit repetitive. Each of the points mentioned, among others , were repeated quite a number of times throughout the book. Admittedly, the points were expanded on each time, but not enough, in my opinion, that they warranted another section/chapter.

There were some amazing recipes included in the book which are reason enough to buy a copy. The author wrote them in a manner easy for first time Japanese chefs to follow, and even included an index as to where the ingredients could be bought (the shops listed are mostly suitable for US reader, although some UK and online resources are provided). Unfortunately, it will be quite hard for me to get the appropriate ingredients in Berlin. I will have a look though and keep you updated via social media if I do.

All in all, there is nothing really groundbreaking about this book. At the same time, I found it a good read due to my interest in Asian food. Japanese food was probably the Asian cuisine I knew very little about so I am glad to have learned some more about it. I also learned some more about Japanese culture in general as quite often various traditions and historic references are intertwined with ingredient descriptions and recipes.

If you were thinking about purchasing Japanese Women Don’t Get Old Or Fat: Secrets Of My Mother’s Tokyo Kitchen, I recommend that you still do. I am interested in reading more books of this kind so if you have any suggestions, please leave them down below.

This book can be bought on The Book Depository (affiliate link).