Some of you may have been wondering where I was the past weeks, while other probably do not give a hoot. Nevertheless, if you choose to carry on reading this post, you will find out what I was up to.

This is the anticlimactic part for those of you who have made it to the second paragraph – I was on holidays. No surprise there in July. I was in London for just under a week, and spent a week at home in Berlin with my sister and her boyfriend. The activities carried out in the last two weeks were enough to keep me away from Joyful Antidotes, but were also enough to provide me with fresh meat to post here. So let’s get started with some snippets from my time in London!

We went to London to visit family and to enjoy some Jimmy Carr tour tickets (Funny Business) we received as a Christmas gift. Unfortunately I have no pictures to share of Jimmy (our seats weren’t in a good place to take clear pictures). I have no video footage of him either as I am hoping for a cut in his DVD sales if you all have to go out and buy it to see what he said. What I can tell you is that he was absolutely hilarious, and even more shocking than he is on the television. Sometimes I felt like the ground would open up and suck me straight down to hell for laughing at jokes about Oscar Pistorius, plane crashes and the disabled. I think sometimes I actually laughed out of sheer shock. Mr. Carr really is not one for the easily offended. But, if he is your cup of tea, I certainly recommend going to see him.

Buckingham Palace was on the list of ‘must-see’ spots although I have seen it three times already. We somehow managed to get a great spot at the front even though we arrived just half an hour before the Changing of the Guards started. Luck of the Irish! The guy in the picture below looked really stern but I think his crowd have a softer side as they played a Billy Joel medley. The policemen may have been the most entertaining though between their beautiful horses and the one liners they had to make people stop crowding up the area. The only negative part was that the cavalry were not there that day. 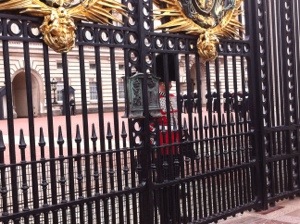 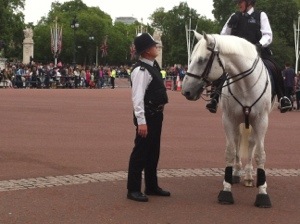 Harrods. What an amazing store! So much luxury and beauty in one place. They had a one person submarine in there!! Surprisingly there were some items in there that were relatively affordable and could be bought for a special occasion. Sadly. I bought nothing that day, but I did go to the Disney café. The equivalent of €14 may be pricey for a toastie but it was tasty, and shaped like Mickey Mouse! 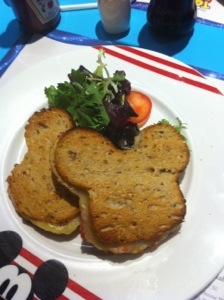 Perhaps my most favourite thing we did was head for the day to Southend. While Berlin is great and all, I miss the freedom you have in Ireland to just head off to the beach for the day. As you can see from the picture below, the weather wasn’t the best, but it was still good enough to go bare-legged and fill my lungs with sea air. We spent some time at the Adventure Island Amusement Park there where of course I was afraid to go on most things. I only became brave towards the end when it was time to go and I went on a (tame) rollercoaster. The highlight of the day bar far, however, was fresh cod and chips at the Neptune Fish Restaurant. Naturally, I topped mine with mushy peas and curry. I definitely recommend dining here if you find yourself in the area.

Ps. If you want a stress free trip, then fly into London Southend Airport. Compact, clean and friendly staff – what more would you need? 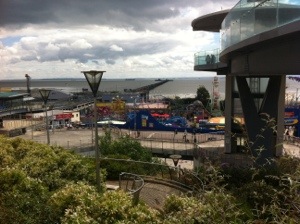 So, there you are, the highlights of my recent trip to London. It is such a big place so I didn’t get to see half of which I wanted. Never mind, I will be back again! Leave any recommendations you have below!