After a long absence, I went to the cinema not once but twice this week. Yes, quite boring information to offer you but the real reason I am writing this post is to offer my tuppence worth about the films I saw – The Great Gatsby and The Hangover III.

Needless to say, both these films have gained much publicity these past weeks – I know I was excited to see them! Regardless of all the hype the films received mixed reviews which admittedly made me a bit skeptical about making the somewhat expensive trip to the cinema.  The fact that I had to see Gatsby in 3D certainly was a turnoff as I have not yet watched a film where I thought that the 3D effect added something special. Considering how elaborate Luhrmann’s films already are I wondered why not just keep it old school. It is not in my nature to admit total defeat but I do think that it enhanced the film. I thought it would be tacky and the most elaborate instances would take place during one of Gatsby’s parties, however I found it rather subtle and almost touching in some places. I really wish I could explai 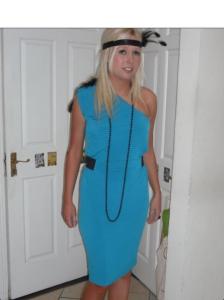 n what I mean a lot better but my lack of terminology refrains me from doing so.So, what else did I like about Gatsby? Well, I can’t wait to get my hands on the soundtrack which is an admission which speaks for itself. A track list for a 1920’s based film featuring Jay-Z guaranteed some puzzled looks but watching the film one would never realize the generation gap. Perhaps the use of music from almost 100 years later can be seen as an analogy that the party really never does end. Luhrmann certainly made a smooth transgression from novel to big screen and in my opinion picked the perfect cast. Each actor/actress had the characters from my head right down to a tee with Di Caprio being exceptionally outstanding. I am a massive fan of the 20s era (check me out on the left in my get-up – apologies for the crap pic) so the film was just utter bliss for me.

The Hangover III was an entirely different film to Gatsby but one which I equally enjoyed. It made me laugh out loud which is not an easy feat. The triology of films are something you either hate or love. I am part of the latter group but did worry when it was announced the cast would return to Las Vegas. Would they repeat the same jokes the third time around or would they go out with a bang? Both these questions can be answered with a yes and a no. Yes there were the same jokes but I felt they were there more for memories sake rather than the lack of original material. Yes it was Vegas again but with a different story and new characters it was not so predictable. Still would have been nicer to see them in another place though as the spark from the first one was just not as apparent. Dis they go out with a bang? Sadly, no. Like I said, I was truly entertained by the film but there was no way they would ever have topped the first one. The idea back then was just too new and fresh, something which could not be replicated with the same level of success.

Have you seen either of these films? Let me know what you thought x